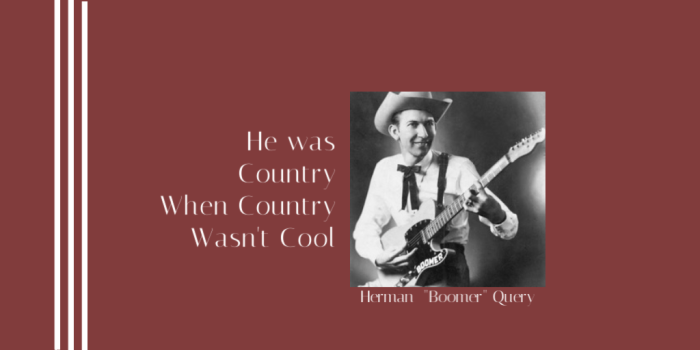 “I Was Country When Country Wasn’t Cool.” by Barbara Mandrell, was a popular song in 1981. I wasn’t much of a country music fan but this song caught my attention; the lyrics made me think about my dad. He passed away in 1978.

He was a good dad in many ways. He loved his kids, he loved my mom. We lived in a nice home in a nice neighborhood, always had good food (my mom was a good cook!) and plenty of clothes. We had lots of great Christmas memories and he always made sure we went on vacation every summer; I think my love for travel came from my dad and all of our fun vacation memories.

He was also a sentimental man; tears would come to his eyes whenever he talked about his mom who died when he was only 9 years old. He suffered from polio in the 1950’s and as a result had one weak arm and one weak leg that caused him to be frail and walk with a limp. But he never let his disability keep him from working and living life. In fact, while I was growing up, he always had two jobs; working for White Castle on the weekdays and playing guitar at night on the weekends. He worked during the day because he had 6 kids to feed; he played guitar at night because he loved country music and playing the guitar.

He taught himself how to play guitar when he was in high school; he played by ear and was pretty good at it. I remember he told me that the principal at his high school used to ask him to play his guitar for impromptu convocations. Here’s a photo of him, I think in 1938, with his guitar and wearing his Cloverdale High School letter sweater that he earned playing basketball:

Later, he made a couple of records (45 LPM) and played in various bands over the years including “The Hoosiers” and “Boomer and the Boomertones.”‘ He played on a local TV station in Indianapolis on a show called Mid-Western Hayride in the 1950’s and worked nights at local taverns playing country music throughout most of my childhood.

He recorded hours and hours of his music, first on Reel-to-Reel tapes, then on cassettes. Our garage and our basement were like recording studios. I have lots of childhood memories of all sorts of musicians coming over to our house to play music. When they played in the basement, it would be full of laughter, cigarette smoke, long neck bottles and loud country music. When I was in my teens, he tried and tried to teach me how to play but I’d complain that the guitar strings hurt my fingers. That was my excuse (although true), but in reality I just didn’t think country music or playing the guitar was very “cool” back then.  Somehow, I was unimpressed by all of it.

Inescapably and as life would have it, the good times were mixed with the bad. Actually my dad’s preferred mix was Calvert’s and 7UP. Nearly every night he would drink. He’d even have me make it for him if I was nearby. He was quiet and kind during the day and then he’d be argumentative at night. It was literally like night and day. I remember thinking everybody’s dad drank whiskey and 7UP every night because that’s what mine did. I think it could be best be described as controlled chaos; it would be crazy at times then everything would be fine the next day. Then one tragic day in 1963 my oldest brother died in a car wreck and our whole family was devastated. My dad had such a hard time coping and was in so much pain. We all were in pain really. During the following 2 or 3 years I witnessed him attempt suicide on two occasions. It’s hard to explain my feelings through the eyes of 9, 10 or 11 year old, but I mostly remember feeling so sorry for my dad but not knowing how to help him – mixed with some anger because it was just so hard to process. Those years were hard; it was a hard time in all of our lives back then. A few years later in 1973, I did what we all do when we grow up; I moved out to live on my own.

In 1978 I moved back home right around the same time that he was diagnosed with lung cancer. He passed away within 6 months of his diagnosis. I remember the night my (future) husband carried him from the house to the car to take him to the hospital where he went into a coma and then passed away two weeks later.  Here’s a photo of us together at a family picnic a couple of months before he passed away: 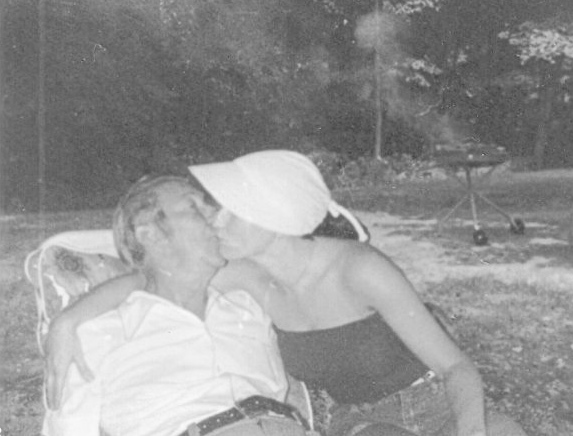 Cancer is a horrible disease and I hate it, but at the same time, I believe it’s a hidden blessing to have the time between the diagnosis of cancer and the time of passing: time to collect your thoughts; time to heal relationships and; time with God. I believe it was God’s providence that drew me back home during that time. I got to spend those last few months living with my dad and my mom while he was going through cancer treatments. It was then and there that I saw my dad read his bible and pray. He talked about God and I saw his bible study notes. He had both old and new notes in his bible. I also learned that he was a Christian long before I was even born. That surprised me because I thought that Christians were supposed to be “perfect” and that they didn’t have any problems. In reality I believe my dad struggled with many real life problems – losing his mom at such a young age, the polio, the alcohol, the death of my brother, etc., each that turned into heavy burdens in his life. In fact, Christians aren’t immune from problems; God uses them to get our attention and ultimately to draw us closer to Him.

“In all this you greatly rejoice, though now for a little while you may have had to suffer grief in all kinds of trials. These have come so that the proven genuineness of your faith—of greater worth than gold, which perishes even though refined by fire—may result in praise, glory and honor when Jesus Christ is revealed.” 1 Peter 1:6-7

Now at this time in my own life, my walk with God wasn’t very close – I was keeping Him at a distance. Even still, I believe God’s grace was at work in my life and that this period of my dad’s passing and me being present in his life during this time was all part of His plan in both of our lives.

And looking back, I realize I was not as close to my dad while I was growing up as I wish I could have been. I think I kept him somewhat at a distance as well.  While my love for my dad has always been there and I never doubted that he loved me, somehow my feelings and compassion for him have actually grown since his passing.  And, if he were here today I would tell him how much I love him and that I now understand that life is not perfect; people are not perfect; Christians are not perfect; difficult things happen in life; and that we all make choices in life that we may later regret. Jesus is the only One who has led a perfect life. If my dad were here today, I’d tell him I’m sorry I didn’t let him teach me how to play the guitar. I’d tell him that his guitar and his country music were “cool.” Most of all, I’d tell him that he was in fact, very “cool.”

“Whoever fears the LORD has a secure fortress, and for their children it will be a refuge.” Proverbs 14:26

This site uses Akismet to reduce spam. Learn how your comment data is processed.