In June 1990, after a 5 day, 2500 mile trek across the country, with two kids in the back seat and one car in tow, we anxiously drove into Los Angeles looking for our new apartment. We had just a few days to get settled in before I was to start working at the LAX Delta Reservation Office. We stopped to get directions for Sepulveda Boulevard. It was a major road so I was a little surprised when the guy didn’t know which road I was talking about. So I pointed it out to him on the map (yes, a paper map) and he burst out laughing. Apparently I needed to work on my Spanish.

We settled in a nice gated apartment in Torrance, right next to a park and an elementary school. It was expensive, like most things in California, but thankfully Harold got a job right away, and we managed to make ends meet. We furnished it with second hand furniture and were so blessed to have a very sweet older couple, Cliff and Irene, live right next door to us. Cliff was a Church of Christ pastor and Irene was an amazing cook who loved to share home-made pies.

The Delta Reservation Office was located just outside of LAX on Century Blvd. The office was big and modern with brand new split screen computers, which was a little intimidating at first. The week I started there, all the buzz around the office was about Kevin Costner’s wife being there for a visit. She worked for Delta before Kevin became a famous actor. I never got to meet Kevin Coster, but over the course of the next year I did run into Ed Begley Jr. (Ghostbuster’s, St. Elsewhere), and I talked to Gary Collins and Elton John’s agent on the phone! Ha!

My new position was a full-time reservation agent. I was basically doing the same job that I had in Tampa, except this was permanent and full-time. My seniority wasn’t much better than it was in Tampa so the best schedule I could get was the late night shift. One night after work I was the first one to come up to the scene of a traffic accident; a young man and his motorcycle were lying in the middle of the intersection. As I got out of my car another car pulled up and the driver told me he worked for United Airlines and that he also just got off work. We walked up together to the victim, asking each other about knowing CPR. I knelt down to try to get his pulse; no pulse. I put my ear next to his mouth; no breath. Then out of nowhere, a police officer ran up to me. He asked if I was a witness or if I knew him, and I told him no. I said a quick prayer for his family, whoever they were. I felt so sorry that they would soon be finding out their loved one was dead. My prayer wasn’t quick enough though. The policeman proceeded to yell at me to get up, to return to my car and leave ASAP. I was a little shocked, but apparently he was just doing his job. I found out later that thieves were known to stage accidents like this, to rob you, or worse. Unfortunately for this young man but fortunately for me, this was not a staging. Over the course of the next year, I didn’t come across any more fatalities, but it wasn’t unusual to be driving down the street, at any hour of the day or night, and to witness police with guns drawn, and suspects spread eagle.

Welcome to the dark side of The City of Angels.

Actually Harold did have a close call while we lived there; I nearly strangled him one night! I came home from work and found out he let Michelle spend the night with a friend but neither of us had her address or phone number! All we knew was that she lived in an apartment across the street. I was livid, frantic, up all night, and at dawn I was over at her apartment complex walking up and down the sidewalks looking for her come out of one of the doors. I walked. I prayed. Repeat. I went home alone, praying all the way. Thankfully she did come home safe, and Harold survived too, but barely.

Michelle and Megan with their friends at the park next to our apartment:

We attended a Baptist church in Manhattan Beach that had an Awana program. The girls enjoyed Awana back in Florida, so I was glad to find a church with the same program in California. One of the Awana leaders was a handsome young man with a great personality. His speech was slightly slurred and he always wore a ball cap. One day he took off his ball cap to show me that he only had half of a scull. Half of his brain was removed due to a car accident from a few years before. He had recovered almost all of his brain function through therapy and God’s help. Simply amazing.

Christmas at our Torrance apartment: 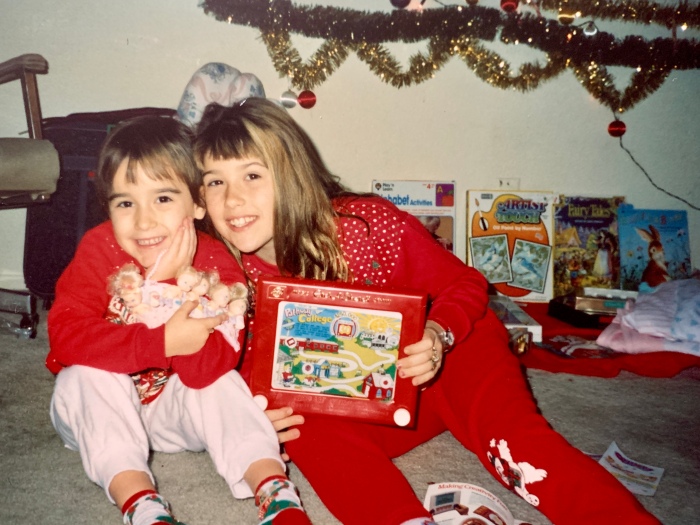 While in Torrance we arranged for my mom to come stay with us for a few months. She was a great help with the girls and we enjoyed a first time vacation to Hawaii together too.

During the time she stayed with us I could tell that Alzheimer’s was chipping away at her, little by little. She took a walk one morning by herself and got lost. I called the police and thankfully she was located right away but it gave me an awful scare. She knew her memory was getting worse and it was beginning to upset her. In time, I came to realize that she stopped being aware of it, so eventually she wasn’t upset about it anymore. I also believe, regardless of how terrible a disease it is, that God has a plan and purpose for everything and that “we are God’s handiwork, created in Christ Jesus” and that a disease doesn’t change that. God is in control no matter what.

And we know that for those who love God all things work together for good, for those who are called according to his purpose. Romans 8:28

Mom and Megan in the atrium park at our apartment: 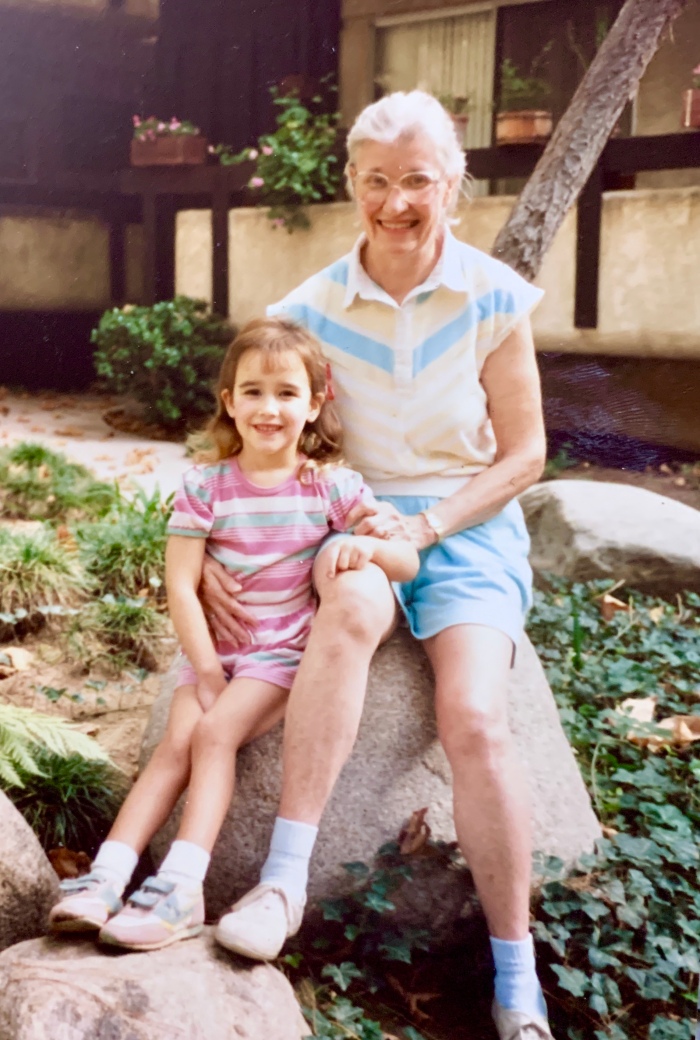 We liked living in Torrance, but the bulk of our family was on the other side of the United States. Besides that, the earthquakes were a little unnerving, and the cost of living was so expensive. I called it a “Real Estate Twilight Zone.” So it wasn’t long before I began thinking about transferring out of Los Angeles. When I saw a new job opening working with special contracts in Atlanta, come up on the job board, I was intrigued. I prayed about it, discussed it with Harold, and got an appointment for an interview. Atlanta wasn’t home, but it would be a lot closer to it.

On the flight to ATL for my interview, I settled in my seat hoping for a nice quiet flight and to do some reading. I’d brought my bible and had been reading for about 30 minutes when the young man next to me struck up a conversation. He started out apologizing to me for drinking a beer. It was a morning flight and I had noticed that he was drinking beer (in the morning!), but I told him no need to apologize. We talked about God and various situations in our lives, and ended up talking the rest of the flight. He told me that his dad was a pastor and that he was a Christian but that he hadn’t been living in God’s will for some time. He said seeing me reading my bible convicted him and made him think about his current walk with the Lord. Once in Atlanta, I went on to the interview. I realized early on that there were a lot of people trying for it, all of which had a lot more seniority than me, and that my chances of getting it were slim to none. I returned to LAX and sure enough I found out a few days later I didn’t get it. By this time I already knew that God had no intention for me to get that job. The job God intended for me was already done. 🙂

Within a few weeks of working in LA, my supervisor suggested I go into the management program, so I decided to give it a try. On the very day I was supposed to start management training, Megan was admitted to UCLA Children’s Hospital with meningitis. So instead of starting a new management training class I asked for time off to be with her. Megan stayed in the hospital for two weeks on IV antibiotics. The infectious disease doctor was perplexed by her test results, suggesting that her meningitis was associated with a problem with the cadaver dura that was used for her surgery in Tampa several months before. Then, within a couple of more months, she was back in the hospital, having yet another neurosurgery to try to detach some of the tumor from her spine. It was after this surgery she was fitted for leg braces and had to start a routine of voiding by catheter. It was a very trying time in our lives, once again. And yet, once again I felt the presence of God helping us through it. In retrospect, I believe God, knowing that Megan was going to need more surgery, placed us near one of the best children’s hospitals and one of the best neurosurgeons in the country, and at just the right time.

The LORD has established His throne in the heavens, and His sovereignty rules over all. Psalm 103:19

Megan with gifts she got while in the hospital:

After several hospital and doctor visits I decided I would not pursue any more vertical career moves with Delta. Megan had so many medical issues I needed to be available both mentally and physically to focus on her. I was however, still very interested in getting back to the other side of the country. So, in June of 1991, after one year in Los Angeles, I made a lateral move and transferred to the Jacksonville, Florida Reservation Office: God willing, the subject of a future blog! 😊🖊